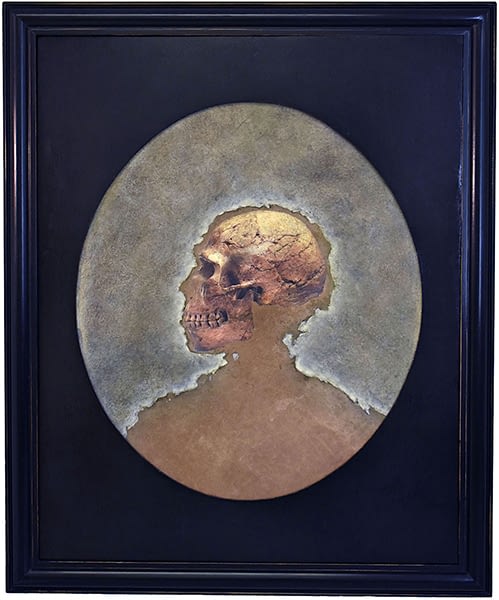 with worn shields
of determination
under
a blistering
shadow
passing unseen
over lingering
sighs
traded notes
& cold keys
perilous things
as the toll
marches on. 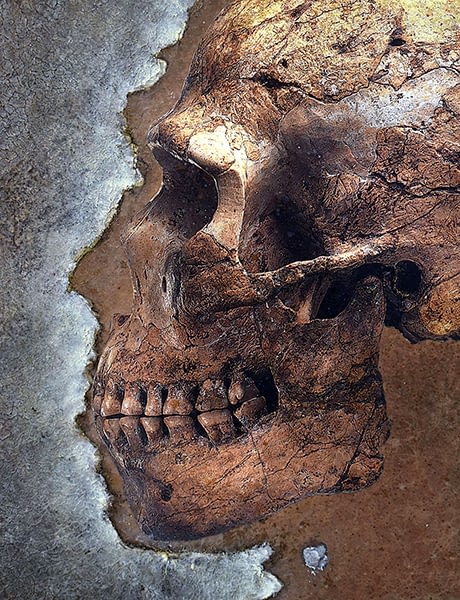 Three months ago, I began work on a large collage that reflects the horror and tragedy inflicting our country at this dark hour. Among other things, Plague also references the great contagions of the past.
Inquire 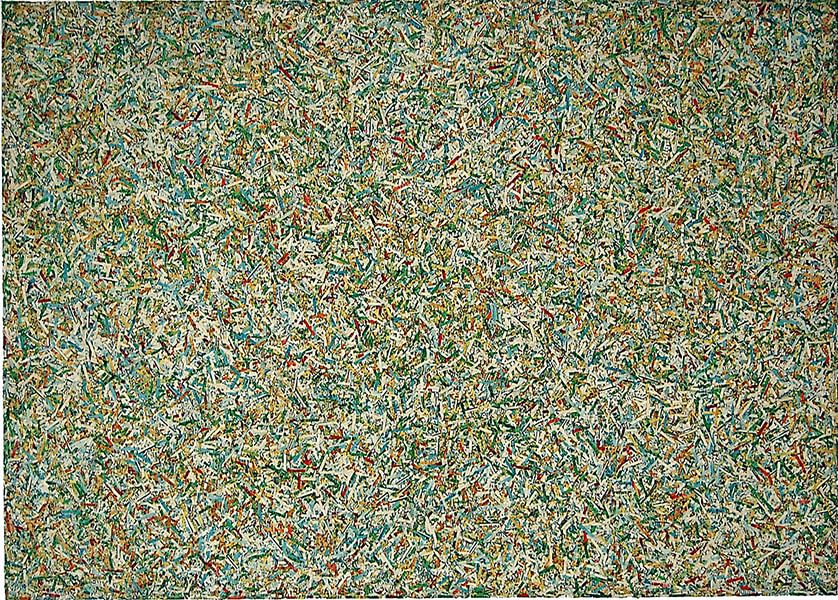 It sometimes seems as if life has been stripped to the bareness of chaos; where chance determines all outcomes great and small and we are at the mercy of forces bent on disruption. So we pick up the pieces of our daily lives and reassemble ourselves as best we can, over and over again, chained like Sisyphus to our routines, a meager consistency. This constant remaking, this endless renewal, in time can take an emotional toll, leaving many of us confused, our passions and thoughts merging and erupting, blurring a sense of purpose. But this endless becoming as it were is what it always was: the essence of existence. And yet, we long for stability, a sense of permanence, cohesion, perhaps to better know ourselves, or maybe to temper our existential dread. Try as we might to gain some footing, we are nevertheless swept up in the great flux of existence. To face this reality demands great courage: for all the instruments of our reckoning, we are, and have always been immersed in chaos, disorder, and uncertainty. It is all there in the senseless equations of physics; the truth buried deep in our marrow. If chaos is the fundamental nature of all things, the drive of entropy, then surely our propensity to try and make sense of it all, including ourselves, may be the only thing that is keeping us human. What a grand paradox! 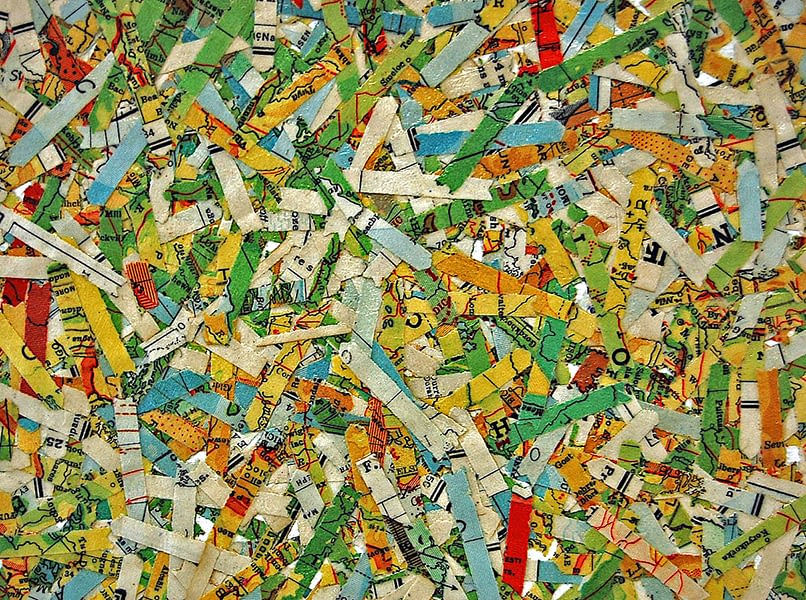 Chaos of thought and passion, all confused;
Still by himself abused or disabused;
Created half to rise, and half to fall;
Great lord of all things, yet a prey to all;
Sole judge of truth, in endless error hurled, --
The glory, jest, and riddle of the world. 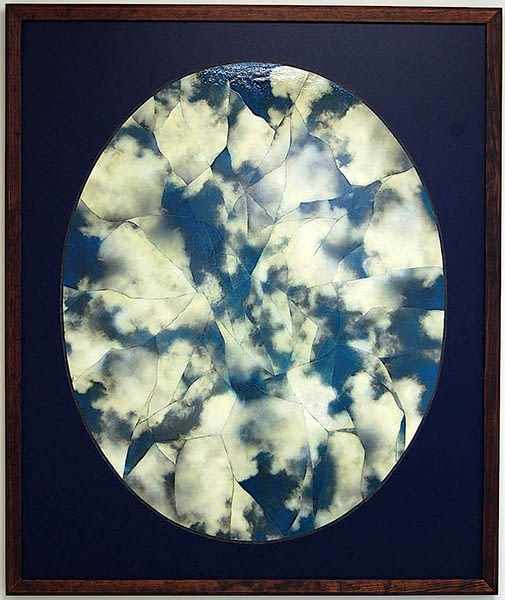 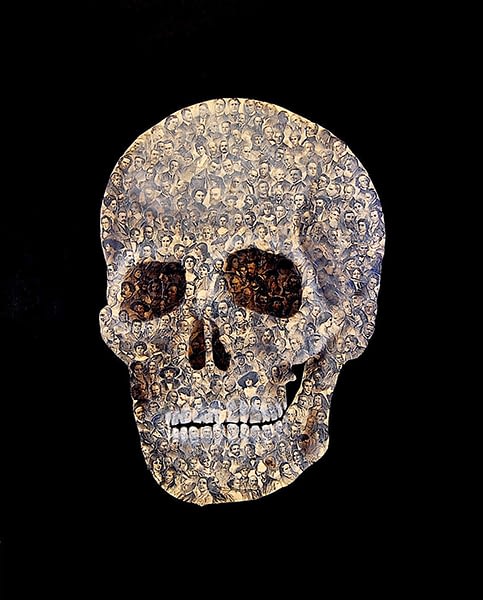 Composed of scores of tiny engraved portraits of the dead, some well known and others forgotten, appropriated from a set of encyclopedia published in the 1920s. History Lesson is a kind of collective memento mori, a reminder of the transient nature of life.
Inquire 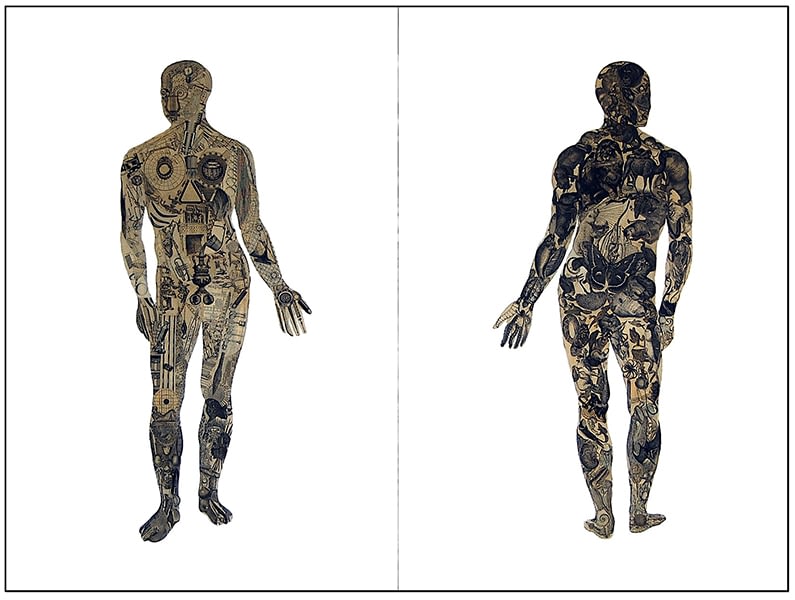 These companion collages are made from hundreds of encyclopedia illustrations glued to two enlarged copies of anatomical charts showing the human muscular system, front and back. Two basic kinds of black and white images cover each chart: cultural artifacts on the frontal view of the human form and animals on the rear view. The artifacts or animals echo the morphology of the muscles and in each case also suggest an evolutionary development, from head to toe, or from the ground up.
Inquire

Paul Forte’s career as an artist began in the San Francisco Bay Area in the early 1970s.  The Bay Area in those days was a crucible for social, political and cultural change, and Forte managed to play a small but vital part.  Like many artists at the time, he was interested in the experimental possibilities of art and, like many others, believed that the changing nature of art still had the capacity to enable new visions, new voices.  Art and politics were always an uneasy combination for the artist, although he understood perfectly well that how art is received, or enabled is largely contingent upon politics and economics, perhaps especially in a capitalist society, which tends to marginalize those artists who cannot or will not meet the demands of the market.  This realization led to an interest in Conceptual art, and to one of its principle mediums: the “artist’s book,” of which he self-published a number of works in small editions.  Throughout the 1970s Forte’s work explored the subjective and aesthetic dimensions of conceptual approaches to art making through a variety of media that would later become the basis for what the artist calls a cognitive approach to art making.

A resident of Rhode Island since 1987, Paul Forte has exhibited at the San Francisco Art Institute, San Francisco, California  (1975,1983); A Space Gallery, Toronto, Canada (1978); 80 Langton Street Gallery, San Francisco, California (1981); The Center for the Visual Arts, Oakland, California (1986); The Wadsworth Athenaeum, Hartford, Connecticut (1991); the Kim Foster Gallery, New York City (1998); and Francis Naumann Fine Art, New York City (2007 & 2008).  Forte’s work is included in the Sol Lewitt Collection, Chester, Connecticut; the Museum of Modern Art, New York City (artist’s books); and the Yale University Art Gallery, New Haven, Connecticut, among others. Forte has lectured on his work at Hera Gallery in Wakefield, Rhode Island; The University of Rhode Island; The Rhode Island School of Design; Brown University (Honors Program); Pratt Institute in Brooklyn, New York; The California College of the Arts in Oakland, California; and the University of California at Berkeley.  Paul Forte is a past recipient of a National Endowment for the Arts, Artist Fellowship (1978), and a Pollack-Krasner Foundation Fellowship (1990).

Toward a Visual Poetics

“An experimental approach to art making, coupled with an abiding sense of the poetic, are the hallmarks of my art. It is an art that has explored this approach and sensibility through a variety of media and artforms over the years: text works, poetry, artist’s books and bookworks, performance art, drawings, paintings, collage, assemblage and constructions. Central to much of this work is the use of found or readymade material. While this practice is widespread, it doesn’t always lead to compelling results. What seems required is an experimental and poetic approach to art making that makes ideas clear and palpable. This is where cognition or the cognitive enters the picture. The clarity and concreteness of an artwork stems from an active imagination and an awareness of the many ways that we think, see and feel about things. Poetic ideas can be developed from found things by paying attention to and utilizing their salient or unusual characteristics. In my work, the ideas thus realized are generally of a symbolic and or metaphorical nature: poetic ideas expressed in either visual or verbal terms, or both. Given the broad range of my art making over almost 50 years, categorizing it in terms of recognizable media or artforms serves to highlight its ongoing experimental nature. Many of the artworks represented here are hybrids in the sense that they could be categorized in more than one way. How a work is classified depends upon what aspect of the work is emphasized. A particular artwork might have elements of both a text work and a collage, or elements of both a bookwork and a construction. Any categorization of artwork is somewhat arbitrary, but it is a helpful tool, especially when the artist seems to have no appreciable ‘signature style.’ Considering the experimental nature of much of my work, it follows that many of the artworks have inspired written commentaries; musings on the processes of their making and offering possible interpretations as to their meaning or significance. For the creative artist, creativity doesn’t end with the artwork; it is an interrelated or integrative process bringing to bear perception, imagination, thought and feeling, for artist and audience alike.”