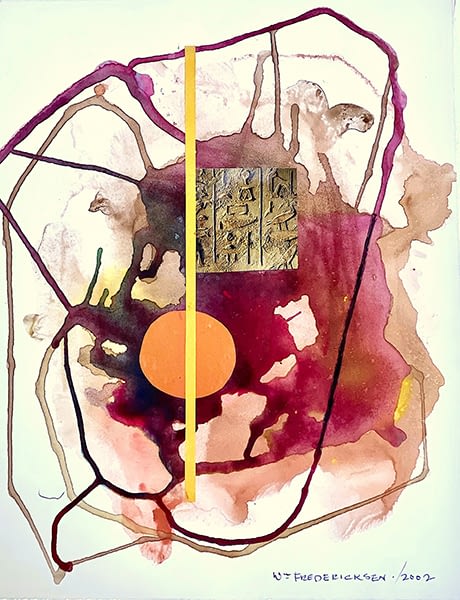 William Fredericksen was born in Norway and came to Chicago, attracted by the New Bauhaus (the Institute of Design), which he entered in the Spring of 1946 where two of his mentors were giants of modernism. Under László Moholy-Nagy and created a series of remarkable photograms and constructivist collages. He also studied under the avant-garde sculptor Alexander Archipenko. These pioneers brought with them courses from the original Bauhaus such as Paul Klee’s course in color analysis and Kandinsky’s approach to abstraction. After Moholy-Nagy died later that year Fredericksen studied photography under György Kepes and painting and color under the abstract artist Werner Drewes. He also studied under three peers: painting with Emerson Woellfer; and, photography under Art Siegel and Harry Callahan. In 1947 Fredericksen was invited to exhibit at the Annual Exhibition of Artists of Chicago at the Art Institute of Chicago. In 1948, after more than two years at the Bauhaus, he left to pursue a career in commercial graphic design and for the next ten years enjoyed success. In 1958 he moved to Chester, Massachusetts, where he continued to pursue his private art while occasionally taking graphic design commissions.

Fredericksen was one of those highly accomplished artists who, despite his early role in American modernism — and his continued great imagination and prolific output of collages and paintings — chose not to actively promote his art. Records show that he occasionally exhibited locally and regionally — at the Jasper Rand Art Museum in nearby Westfield, Massachusetts and at some of the annual “Art of the Northeast” juried exhibitions at the Silvermine Arts Center in Connecticut.  He even exhibited at the André Emmerich Gallery in New York. But for the most part Fredericksen remained more content to pursue his art in a private way without any care of self-promotion. Indeed, he rarely sold his works, preferring instead to surround himself with them, as would a hoarder. As a result, when he died in 2010 he left behind a large and extraordinary collection into which art historians are just beginning to delve.